I did a talk at Brechin Photographic Society this week on the big question asked by members every year - should I shoot in JPEG or RAW? I don't think my position as president of the club quite gives me the right to post my opinions as gospel on the club's website though, so I'm posting my story here so people can appreciate that it is my amateur opinion on the subject, and can choose to ignore it as they wish!

This blog will be a written version of my powerpoint presentation from last night, embellished where I can to explain the answers to questions raised by the audience. I'm very glad that the talk raised so many questions - it proved that not everyone had fallen asleep.

A RAW file is minimally processed data from the image sensor. It will contain the information required to produce a viewable image from the camera's sensor data. The structure of raw files usually includes:

When we edit a RAW file, we edit how the computer interprets the data. This is stored in a separate file – for Adobe it is a .XMP file. This file can be edited, duplicated, deleted, lost completely, and the data within the RAW file remains unchanged.

When we finish the editing process, the final result is exported or saved as a compressed file – normally a JPEG – so we end up at the same place.

So what is JPEG?

A JPEG file from a digital camera is the camera’s pre-processed file, then compressed to the JPEG format. It will look significantly better to your eye than the RAW file will, but contains much less information. The camera sensor gathers the same information as it did for the RAW file, but your camera now does the following:

That's a lot of things that our cameras do in the fraction of a second, and is done based on pre-set algorithms and assumptions. Cameras are really very clever, but ultimately they don't know if you are photographing an osprey in flight or a vast landscape - all it sees is light. It processes the image in the same way regardless.

8-bit JPEG files are absolutely fine… until we start editing them.

The in-camera processing deals with all the data received by the sensor, and ends with compression to an 8-bit JPEG file.

If we import a RAW file to Photoshop or Lightroom, we are dealing with the image in a 16-bit mode, which gives us 281 trillion colours! That's a LOT more than 16.8 million - everything needs perspective. For every separate colour a jpeg contains, the 16-bit image taken from the RAW file contains 16,726 different colours!!

Editing an 8-bit file, changing colours, recovering shadows and highlights, dodging and burning will quickly result in banding, artefacts, pixelization and an overall degradation in image quality. Even the process of opening, and saving a jpeg file theoretically degrades it's quality.

I mentioned above that cameras only see light. In fact the sensor can only measure luminance. Our sensors are made up of millions of pixels - each one measuring the intensity of light that hits it. In order to translate this into an image, the sensor is covered by a 'bayer' filter - basically a filter that blocks different colours from reaching the sensitive surface of the sensor. Each group of 4 pixels therefore record red, green, blue and.... green again. The second green filtered pixel reads total luminance.

Camera sensor under a microscope, showing the bayer filter

The slideshow below shows an RAW file of Bow Fiddle Rock, split to show how the sensor records red, green, blue and luminance hitting the sensor, via the bayer filter. This is shown using a programme called RAWTherapee - for which I can think of very little use apart from demonstrating this fact! 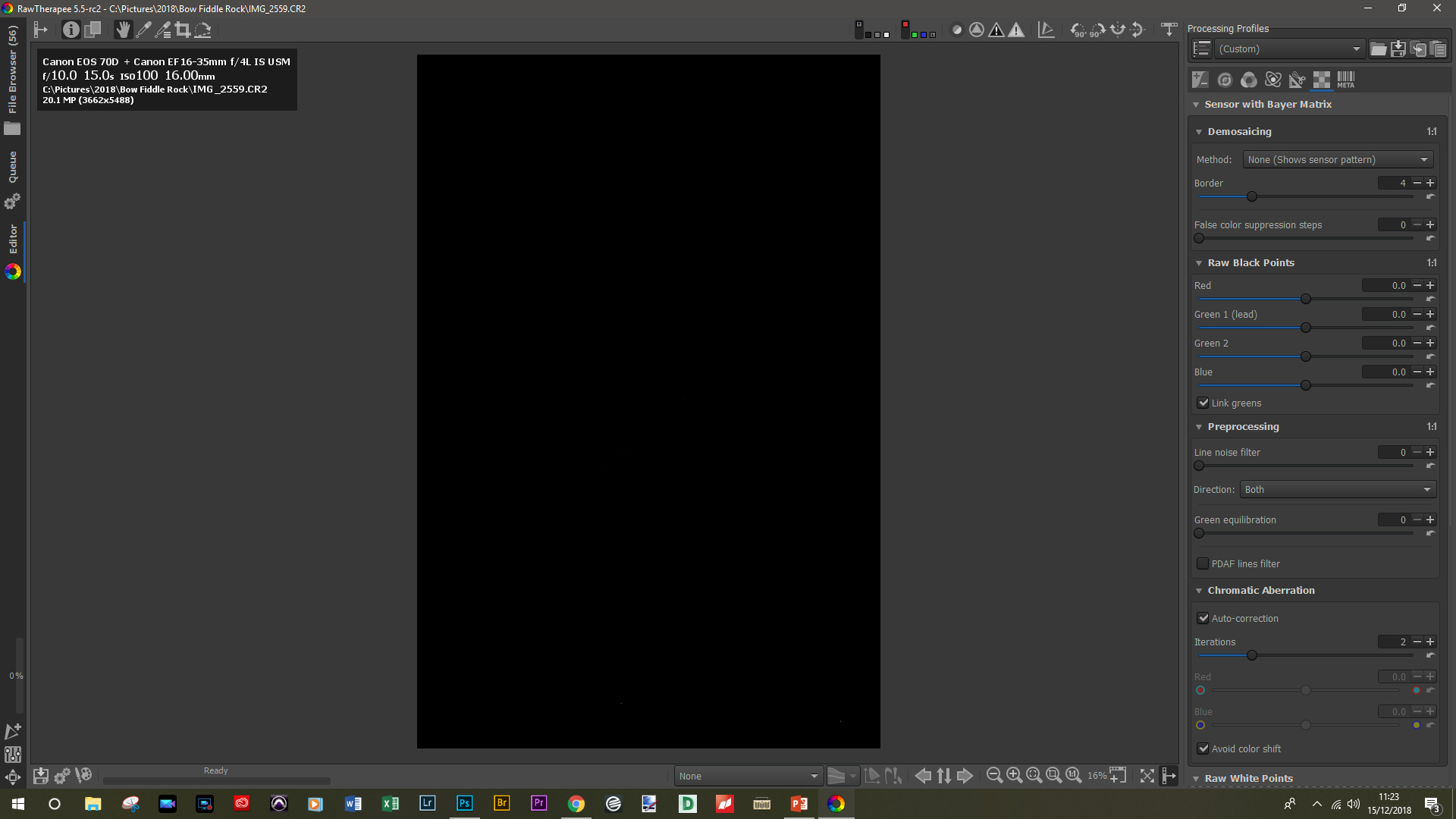 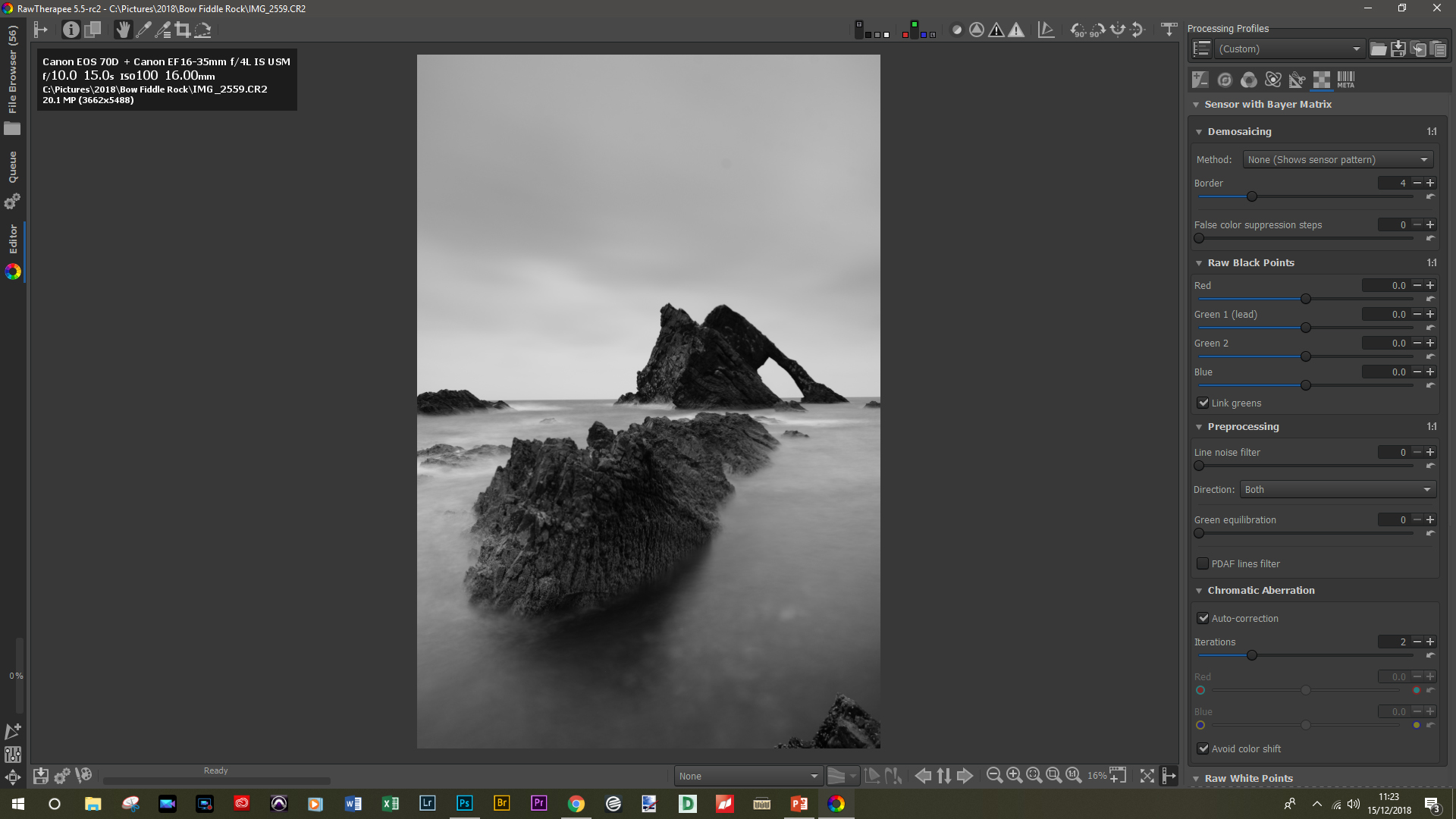 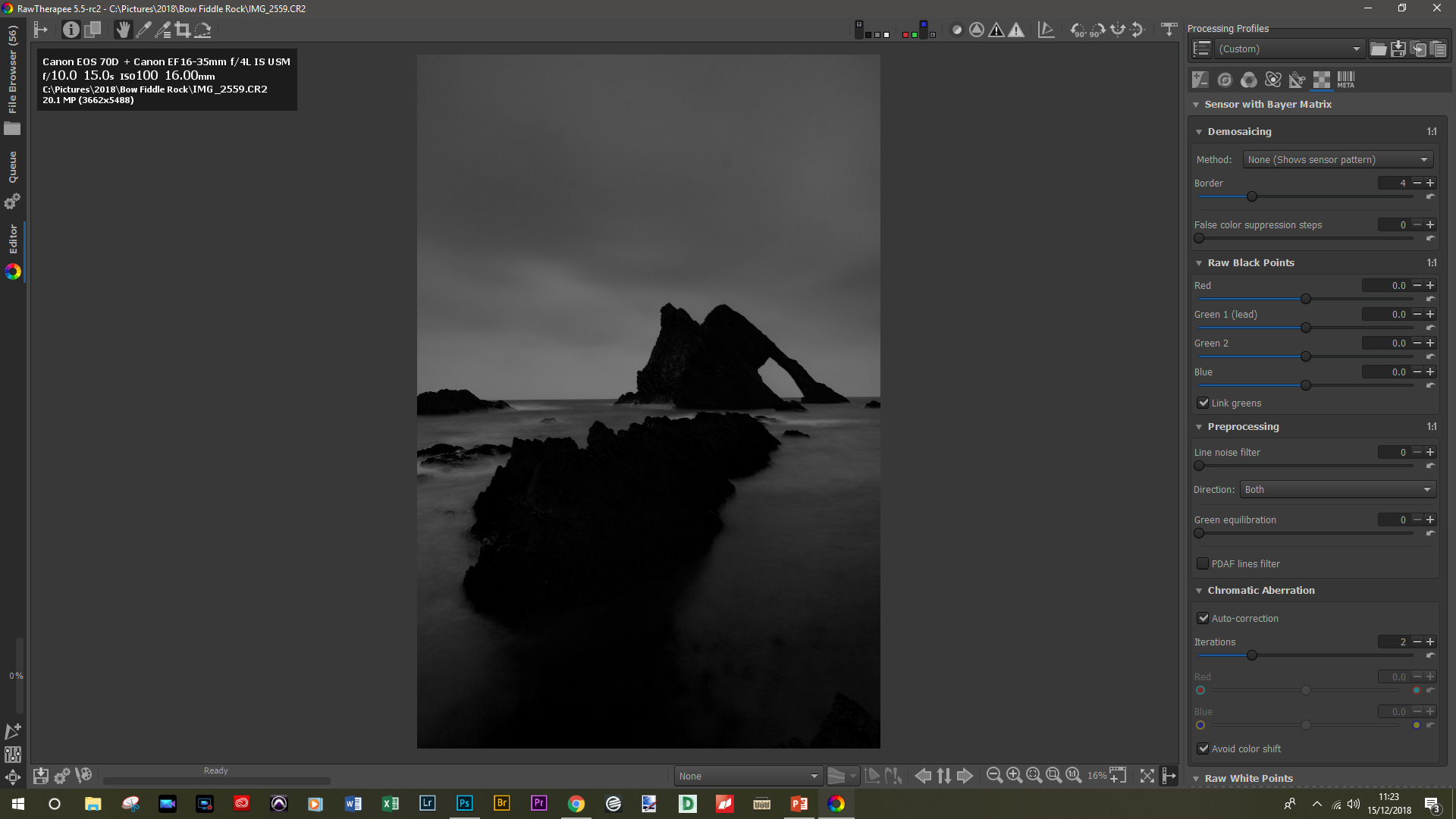 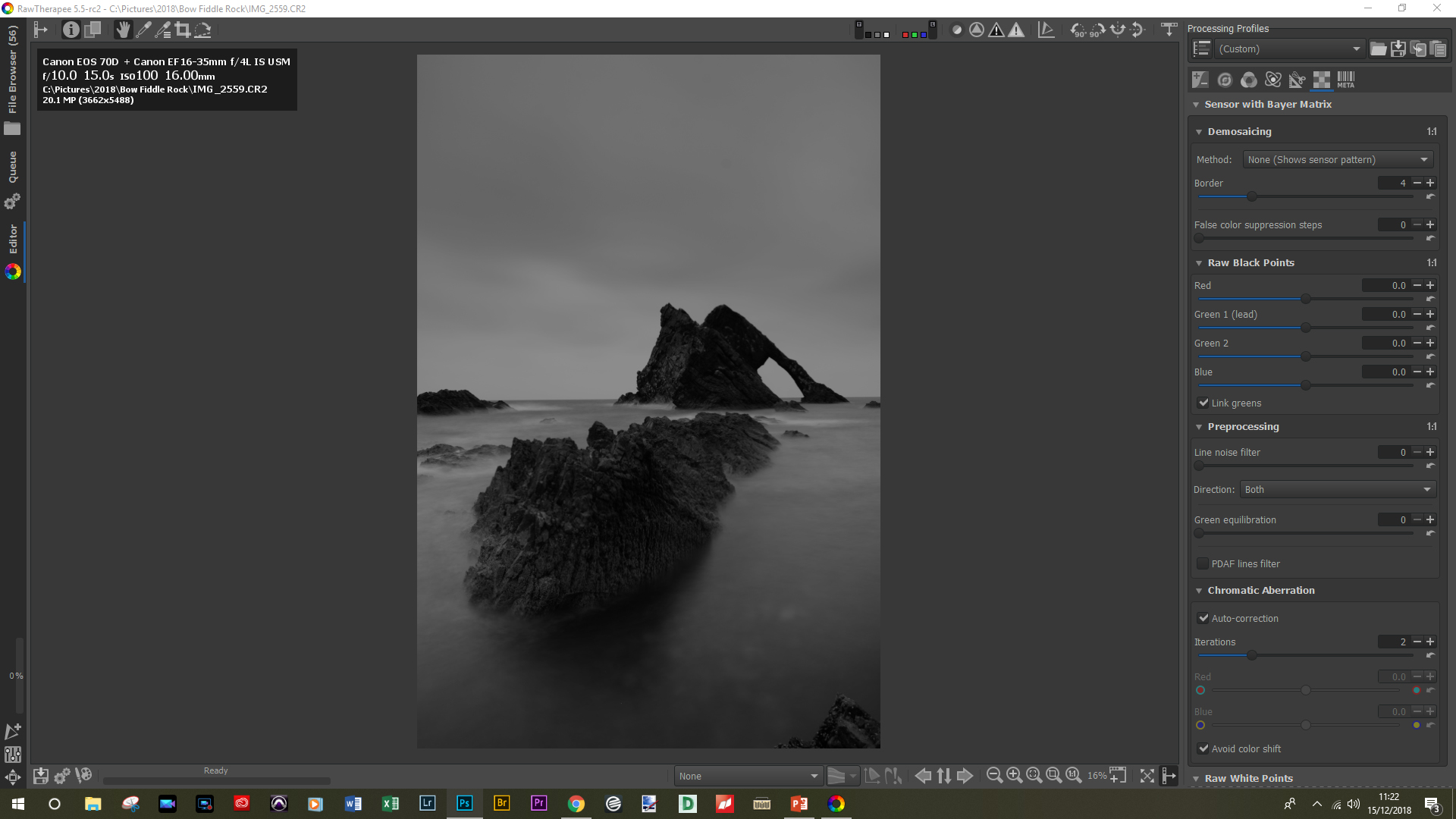 The result of this is a set of data that looks like the image below.

A RAW file before it is 'demosaiced'

It's green, because we have twice as many green pixels on the bayer filter than red or blue - and as we saw above there is almost no red light being recorded in this image. However, if we zoom into 800%, we suddenly see how the image is constructed.

RAW file at 800% displayed in RAWTherapee

So this is what a RAW file ACTUALLY 'looks' like. It's just DATA, displayed on screen. Our software, e.g. lightroom or photoshop then carries out an automatic process called 'demosaicing' - where it tells the computer how to interpret that data.

The same 800% zoom 'demosaiced' by Photoshop

When we hear about 'colour science' of a certain brand - ultimately it is the algorithm that demosaics the RAW data to form this image.

But what if I don't like that image the way the algorithms decide it should be. What if I want it to look like this?

To put the above images into context, the lighting conditions were difficult and flat, but I had an image in mind that I wanted to create. Below are (l-r) the RAW file as displayed in Lightroom (demosaiced automatically), what Lightroom came up with by hitting the 'Auto' button - and therefore what a JPEG might have come out of the camera like - and finally a basic edit in Lightroom by me. None are very exciting really.

{"items":["2f2677_43539ab2cde74383b306b8e6d5d380fb~mv2_d_3648_5472_s_4_2.jpg","2f2677_8f5f95729d804f4cba3dc81c5b85d176~mv2_d_3648_5472_s_4_2.jpg","2f2677_53a36dc764f94440b2280297884501a9~mv2_d_3613_5419_s_4_2.jpg"],"styles":{"galleryType":"Columns","groupSize":1,"showArrows":false,"cubeImages":true,"cubeType":"fill","cubeRatio":0.5625,"isVertical":true,"gallerySize":300,"collageAmount":0,"collageDensity":0,"groupTypes":"1","oneRow":false,"imageMargin":0,"galleryMargin":0,"floatingImages":0,"chooseBestGroup":true,"smartCrop":false,"hasThumbnails":false,"enableScroll":true,"isGrid":true,"isSlider":false,"isColumns":false,"isSlideshow":false,"cropOnlyFill":false,"fixedColumns":3,"enableInfiniteScroll":true,"isRTL":false,"minItemSize":50,"rotatingGroupTypes":"","rotatingCubeRatio":"","gallerySliderImageRatio":1.7777777777777777,"numberOfImagesPerRow":3,"numberOfImagesPerCol":1,"groupsPerStrip":0,"borderRadius":0,"boxShadow":0,"gridStyle":1,"mobilePanorama":false,"placeGroupsLtr":false,"viewMode":"preview","thumbnailSpacings":0,"galleryThumbnailsAlignment":"none","isMasonry":false,"isAutoSlideshow":false,"slideshowLoop":false,"autoSlideshowInterval":4,"useCustomButton":false,"bottomInfoHeight":0,"titlePlacement":"SHOW_ON_HOVER","galleryHorizontalAlign":"center","galleryTextAlign":"center","galleryVerticalAlign":"center","scrollSnap":false,"itemClick":"link","fullscreen":false,"allowSocial":false,"allowDownload":false,"allowTitle":true,"allowDescription":false,"loveButton":false,"loveCounter":false,"videoPlay":"onClick","scrollAnimation":"NO_EFFECT","scrollDirection":0,"overlayAnimation":"NO_EFFECT","arrowsPosition":0,"arrowsSize":23,"watermarkOpacity":40,"watermarkSize":40,"useWatermark":true,"watermarkDock":{"top":"auto","left":"auto","right":0,"bottom":0,"transform":"translate3d(0,0,0)"},"loadMoreAmount":"all","defaultShowInfoExpand":1,"allowTitleExpand":true,"allowDescriptionExpand":true,"allowLinkExpand":true,"expandInfoPosition":0,"allowFullscreenExpand":true,"fullscreenLoop":false,"galleryAlignExpand":"left","addToCartBorderWidth":1,"addToCartButtonText":"","slideshowInfoSize":200,"playButtonForAutoSlideShow":false,"allowSlideshowCounter":false,"hoveringBehaviour":"APPEARS","thumbnailSize":120,"magicLayoutSeed":1,"imageHoverAnimation":"NO_EFFECT","calculateTextBoxHeightMode":"AUTOMATIC","calculateTextBoxWidthMode":"PERCENT","textBoxHeight":0,"textBoxWidth":200,"textBoxWidthPercent":50,"textImageSpace":10,"textBoxBorderRadius":0,"textBoxBorderWidth":0,"textsVerticalPadding":0,"textsHorizontalPadding":0,"titleDescriptionSpace":6,"customButtonText":"","customButtonBorderWidth":1,"customButtonBorderRadius":0,"loadMoreButtonText":"","loadMoreButtonBorderWidth":1,"loadMoreButtonBorderRadius":0,"imageInfoType":"NO_BACKGROUND","itemBorderWidth":0,"itemBorderRadius":0,"itemEnableShadow":false,"itemShadowBlur":20,"itemShadowDirection":135,"itemShadowSize":10,"imageLoadingMode":"BLUR","expandAnimation":"NO_EFFECT","imageQuality":90,"usmToggle":false,"usm_a":0,"usm_r":0,"usm_t":0,"videoSound":false,"videoSpeed":"1","videoLoop":true,"galleryLayout":2,"gallerySizeType":"px","gallerySizePx":300,"allowHover":true,"mobileSwipeAnimation":"NO_EFFECT","gotStyleParams":true,"showVideoPlayButton":true,"imageResize":false,"galleryImageRatio":2,"modifiedGallerySize":true,"selectedLayout":"2|none|1|fill|true|0|true","layoutsVersion":2,"selectedLayoutV2":2,"isSlideshowFont":false,"externalInfoHeight":0,"externalInfoWidth":0},"container":{"galleryWidth":2560,"galleryHeight":1440,"scrollBase":0,"height":null,"width":null}}
The final picture, the way I imagined it

The final image is very different from the original image, but by telling the computer how to interpret the data from the RAW file, rather than changing the data, I was able to achieve what I set out to do, and I am very pleased with the final image.

Had I tried to do the same with a JPEG file, I would have been editing the actual pixels, the colours, the shade, and would have degraded the image to a mess.

So this is a situation where the final image could only really be successfully produced by shooting in RAW - and demonstrates that the process of editing a JPEG and 'editing' a RAW file are completely different. It isn't that RAW has more data and therefore greater flexibility - it's a TOTALLY DIFFERENT process.

Another example, again emphasised by difficult lighting and shooting conditions was of waxwings in Montrose - a bird I hadn't seen before and wanted to capture. I didn't have the option to wait for better conditions, I might not have seen one for another decade.

I shot in JPEG and RAW simultaneously - RAW on the left, JPEG on the right. They look similar - the camera has struggled to render a good JPEG image because the lighting conditions were dreadful. It's underexposed, the background is quite bright - but I had to shoot at this setting to achieve the necessary shutter speed to get the bird sharp.

Look closely though, and you can already see that the JPEG image has had some noticeable noise reduction and sharpening applied in camera - by the pre-set algorithms. We can't undo that. We also know that it's been rendered to an 8-bit JPEG file, so it has 16,726 times less colours than the RAW on the left.

This really begins to become an issue when we want to try and make the most out of this image. Editing both the images EXACTLY the same in Photoshop Camera RAW, we can see the difference between the two images widen dramatically.

Look at the feather detail and the sharpness of the eye in the image on the left compared to the JPEG on the right. We can also begin to see pixelization and chromatic aberrations around the beak on the JPEG image. The image edited from the RAW data on the left may be slightly more grainy - but I'd rather that trade off to show the detail in the bird - and I'd certainly rather have the CHOICE instead of it being done for me in 1/200th of a second in camera.

Maybe the differences look subtle - but if I didn't see another waxwing for a decade and I'd only shot the JPEG image, I'd be pretty annoyed.

I had 9 waxwings in a tree about 100 yards from my house a week later, ha ha!

Does it REALLY matter then?

Maybe – but it’s not a REQUIREMENT of being a REAL photographer. The superior status of being a ‘RAW shooter’ is nonsense.

The fact is that cameras are REALLY good at producing well edited JPEG images, and in the majority of situations they are just fine.

However, some things become important, like setting your white balance correctly, and getting the exposure right. You need to make sure that the processing that the camera does is the best it can be. If the lighting conditions are difficult, or you don't have time to spend setting up your camera settings in fine detail, then RAW is your friend.

During the talk at BPS, Iain McLachlan noted that he went to Norway, and took many hundreds of photos that looked pretty terrible out of the camera, but a simple adjustment to the White Balance (temperature) in Lightroom - applied to all the images together (so the edit took seconds to apply to ALL the pictures) - brought them back to accurate colours. White Balance, when shooting something like snow, is very difficult to get right, but it is irrelevant when shooting in RAW, because White Balance settings are only an instruction to tell the software how to interpret the RAW data. Once that is compressed to an 8-bit JPEG file, you are goosed though - trying to significantly change the White Balance of a JPEG file will lead to file degradation. Heaven forbid you set your camera to Tungsten light for an indoor shoot and then forget to change it back again and grab your camera to capture that fleeting glimpse of an eagle in JPEG.

The point of shooting in RAW comes if you want to do more to your photos than just print or share them online. If you WANT to do more than a very basic edit to produce the best possible final image, then you REALLY SHOULD consider shooting in RAW.

It is 100% about what YOU want to achieve with your photos.

Images submitted to competitions are JPEG files – we don’t submit RAW files. Prints can be produced from JPEG files just the same as they can from non-compressed files.

If your camera takes pictures that you are happy with, stick with JPEG.

If an image needs to be edited, however, a JPEG image will quickly begin to ‘fall apart’ and become pixelated, banding will appear, highlights and shadows will be clipped, and print quality will be severely degraded.

Shooting and editing in RAW is very much the modern equivalent of using a dark room to develop images. We control the whole process, but in order to get a finished print, there is a lot of work and know-how involved to do it well, but it's rewarding.

Shooting in JPEG is the modern equivalent of taking pictures and sending them to the lab to be printed.

If we got prints back from the lab and started trying to edit them, we’d ruin them pretty quickly – this is a pretty good way of thinking about it.

Edit a print - don't be daft!! - It's VERY similar to editing a JPEG really

The bottom line is therefore that there is no right or wrong, but I think it's important to realise that comparing RAW and JPEG is not comparing apples with apples - they are two completely different things, and the process of 'editing' them is also fundamentally and mechanically different.